A woman’s cliché, her realm of activity, in the 1950s was supposed to be making and looking after children, keeping the house and the kitchen and if leaving the house to go to church. Nowadays, this realm has expanded, fortunately. But still, a woman’s life is centred around family and struggeling with the dilemma of pursuing a career at the same time – how to be a superwoman?

The three images depict a clean and abstracted view of the deserted three scenarios – giving just hints of the stories behind. The children’s room is vacant, the bed is empty. In industrial countries birthrates are decreasing, or is the child just outside playing happily? The kitchen has shrunk to a kitchenette, cooking goes as far as making coffee and the housework is done by somebody else. The modern temples are shopping malls, especially in Hong Kong the consumerism is highly ranked. The purchase of a new pair of designer shoes becomes a devotion.

The question is, is that really the truth? Every woman has to find out for herself.

About the artwork:
A Woman’s Realm series is a form of hybrid art made with the computer. The drawings are done with a drawing pad. The interesting thing is, that during the creation I can mainly imagine what the finished art piece will look like. It is only in my mind. The lines come from a virtual pen and the colours I see are only pixels of light on the screen. The artwork is a virtual reality, yet a creative process controled by me right until the end. Even the output will be a surprise.

The computer is the major tool in creating my art pieces. However, the physicality of the final product is very important. The creation with the computer is almost intangible but the product will be a tactile object. The drawings imitate their origin and are presented in boxes of (virtual) light.

To be seen in the exhibition Just a Little Ladies’ Talk at Blue Lotus Gallery, Hong Kong March 1-30, 2008. 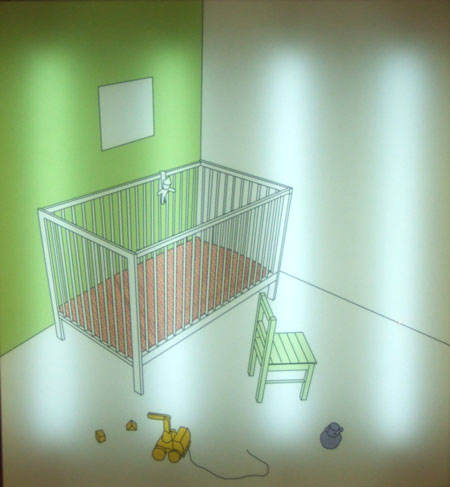